This month's Karen Burniston Designer Challenge has such a fun theme -- Ball and Small.  We were to create a ball animal and pair it with the same critter from our animal sets.  However, I had a bit of a detour for my card.  The first time I read our list of challenges, I didn't pay close enough attention to the list and made an Easter card with a little Easter scene (Easter bunny with basket) on the front and a pop-up bunny on the inside.  Then I realized this challenge was for May, not April -- much too late for an Easter card.  So then I made second card with a couple of honey bees inside and out.  But Karen Aiken had already made (and showed it to the team) a card with bees.  Not wanting similar cards from two members of the team for this challenge, I made a third one.  Karen Burniston had suggested an astronaut, paired with the Space Charms (even though these are not technically "critters").

So the third time was the charm.  Here is my designer challenge card for Ball and Small.  On the front is that little astronaut from Space Charms and the rocket ship from the Rocket Pop-Up set. 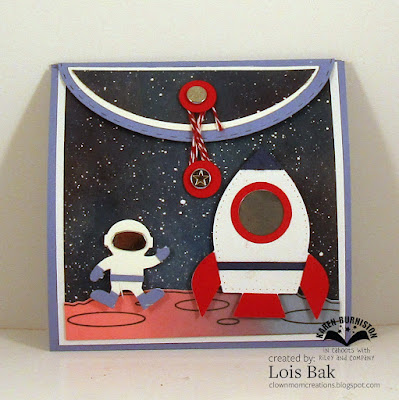 The inside was a bit more challenging.  His head is made with the new Mini Ball Pop-Up and the helmet is made with the Bitty Ball (obviously with no rubber bands).  I used parts of the Character Add-ons 2 (Santa & Mrs. Claus) to decorate him.  The sentiment was created using the new Mini Alphabet and Numbers set. 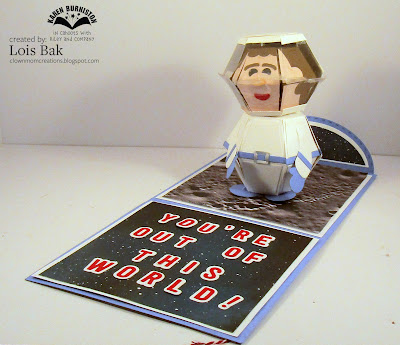 Here is a close-up of the astronaut so you can see a bit better how it was constructed. 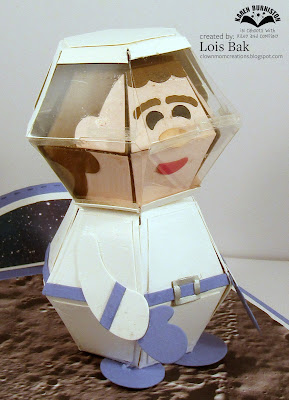 I cut the helmet from white cardstock and cut off three of the panels from each section, leaving just a small strip on each.  Then I cut the panel again from a piece of acetate and separated each panel.  After snipping the connecting sections in half (to make them narrower so as not to get caught up with the head), I connected the white sections of the helmet together.  Then I wrapped the helmet around the head and glued on the bottom panel to the head.  I stacked four adhesive foam squares together, coloring the sides with a dark brown Copic marker, and placed it on the top of his head under the helmet.  This way when the card is opened, the helmet will sit slightly above his head, thereby pulling in the sections a little bit.  There are still gaps in the "viser" section of the helmet, but not as much as would have been there without the elevating foam squares.   I then adhered the acetate sections to the small strips left on the helmet sections and put them together using 1/8" Scor-Tape.

This was a triple challenge for me, but I think it was eventually worth the trouble.  Thanks for stopping by.

Wow! You nailed it! Never one to back down from a challenge! Good job, sis!

Love this one The helmet is very ingenious love love it