This was my final week as a sample maker for the Sketch Challenge over on Splitcoaststampers.    Allison had given us a daunting task with this sketch: 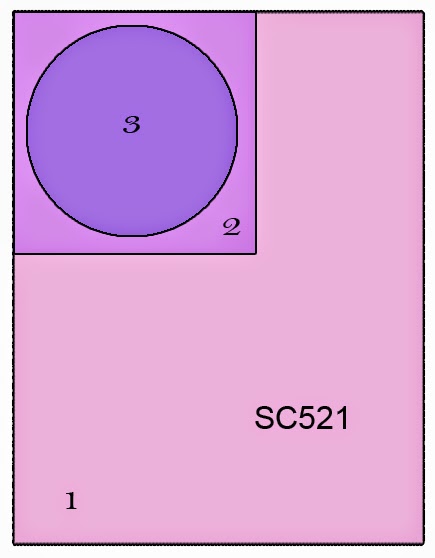 My card started out as basically a Clean and Simple design, but morphed into something a bit more "busy." 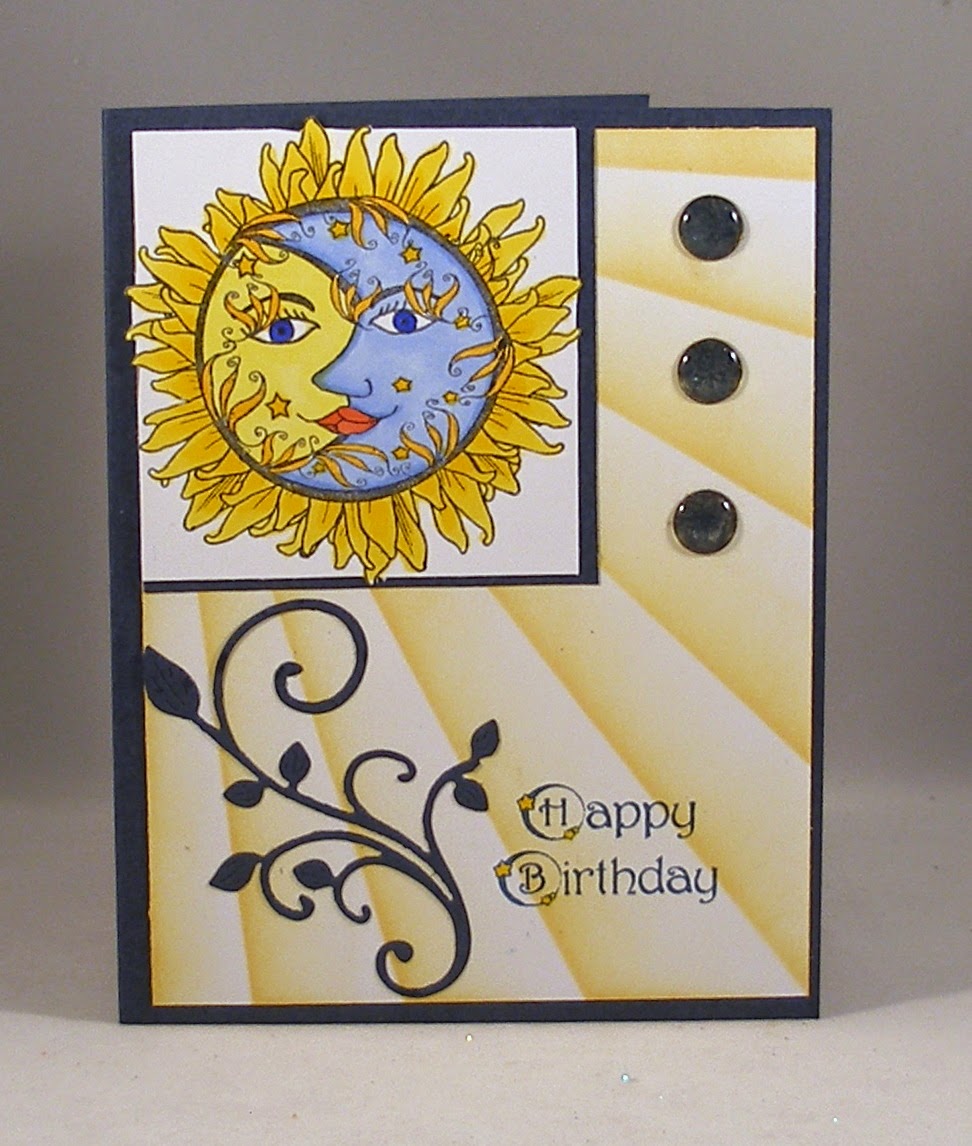 I sponged the rays with Ranger Distress Scattered Straw ink and planned just to add the sun/moon panel and the sentiment, which definitely would have been CAS.  However, I smudged a bit of ink onto the sunrays; and, after all the time it took to do that sponging, I was not about to throw it away.  So I cut a small flourish and adhered it strategically to cover the smudge.  Then I had to add the Enamel Dot stickers to balance out the flourish.   No longer CAS!

I enjoyed my stint as part of the Sketch Challenge team.  It was supposed to be a three-month gig, but it extended to five months -- and I had a grand time.   Thanks, Janette, for asking me.

I have one more week as a sample maker for the Splitcoaststampers Sketch Challenge.  Today's sketch was pretty simple -- a circle inside a square.  I had bought a set of Spellbinders arrows (called Shoot) about a month or so ago, and I thought I could make an archery target out of the circle element and use one of the arrows.  I stamped the "Happy Birthday" on my card, but computer-generated the "You Hit the Mark" sentiment at the bottom. 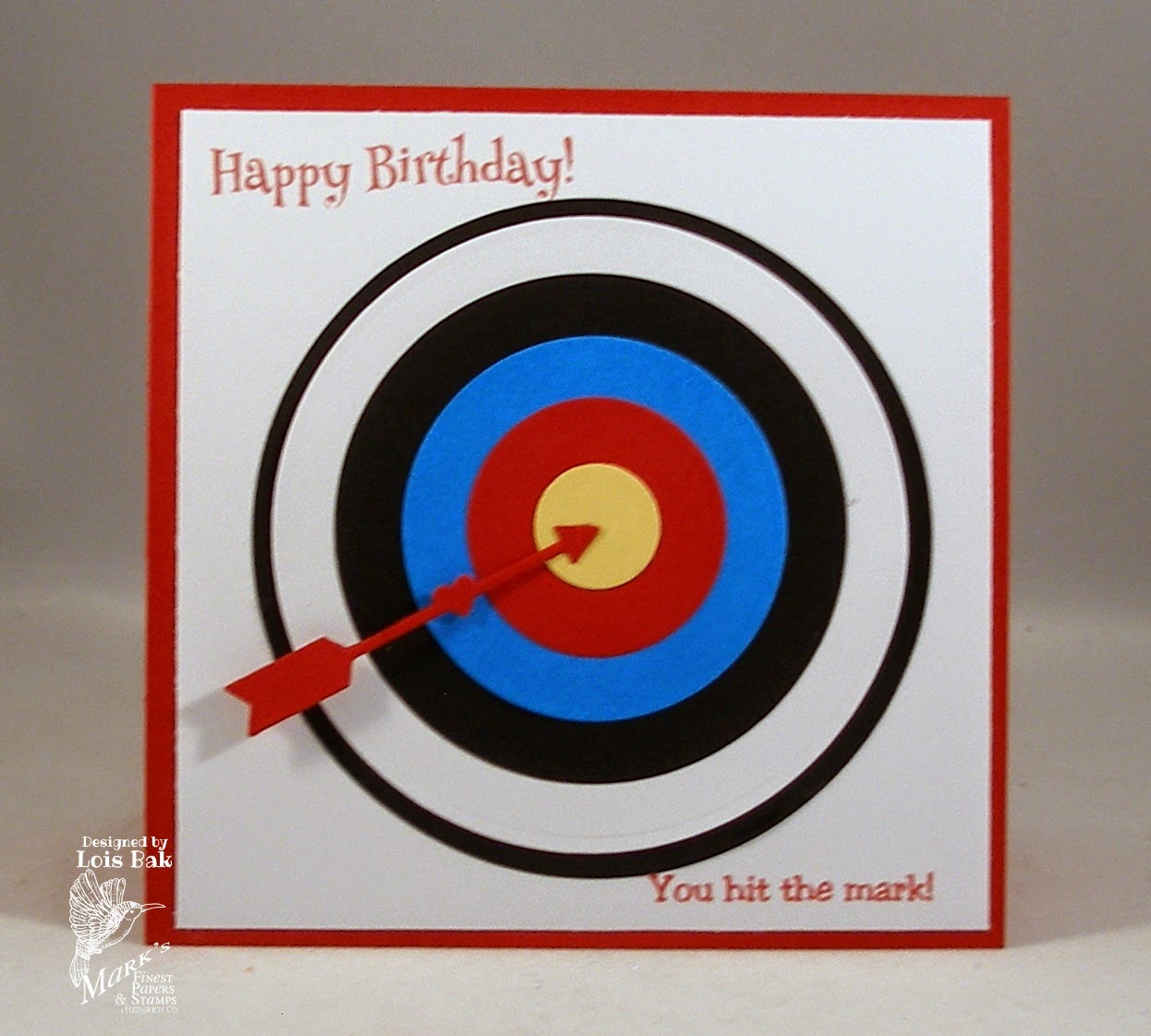 It's Christmas Eve, so I will with you all a Merry Christmas!

It's been a while since I've posted any Splitcoaststampers challenge cards, but I decided I should start doing that.  As the Inspiration Challenge is my favorite one of the week, I started there.  Today's inspiration site is a Pinterest board with all sorts of packaging from all over the world.  I chose this particular photo to use as my inspiration. 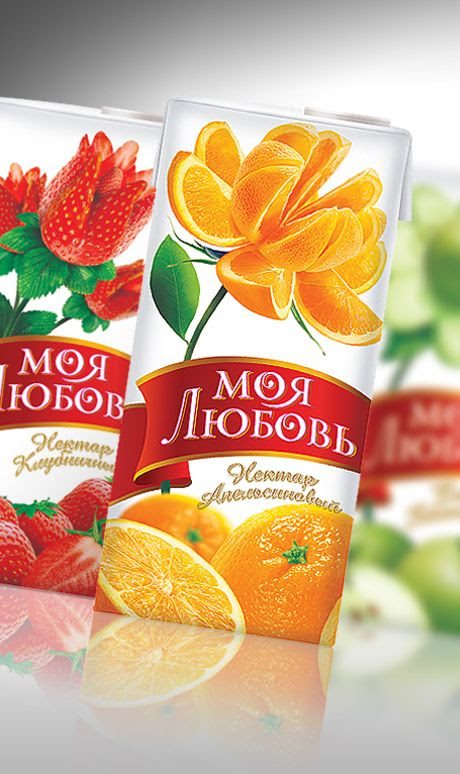 I thought the photos on the juice containers looked just like flowers, and the orange juice one reminded me of a chrysanthemum stamp from MFP Stamp Shop. 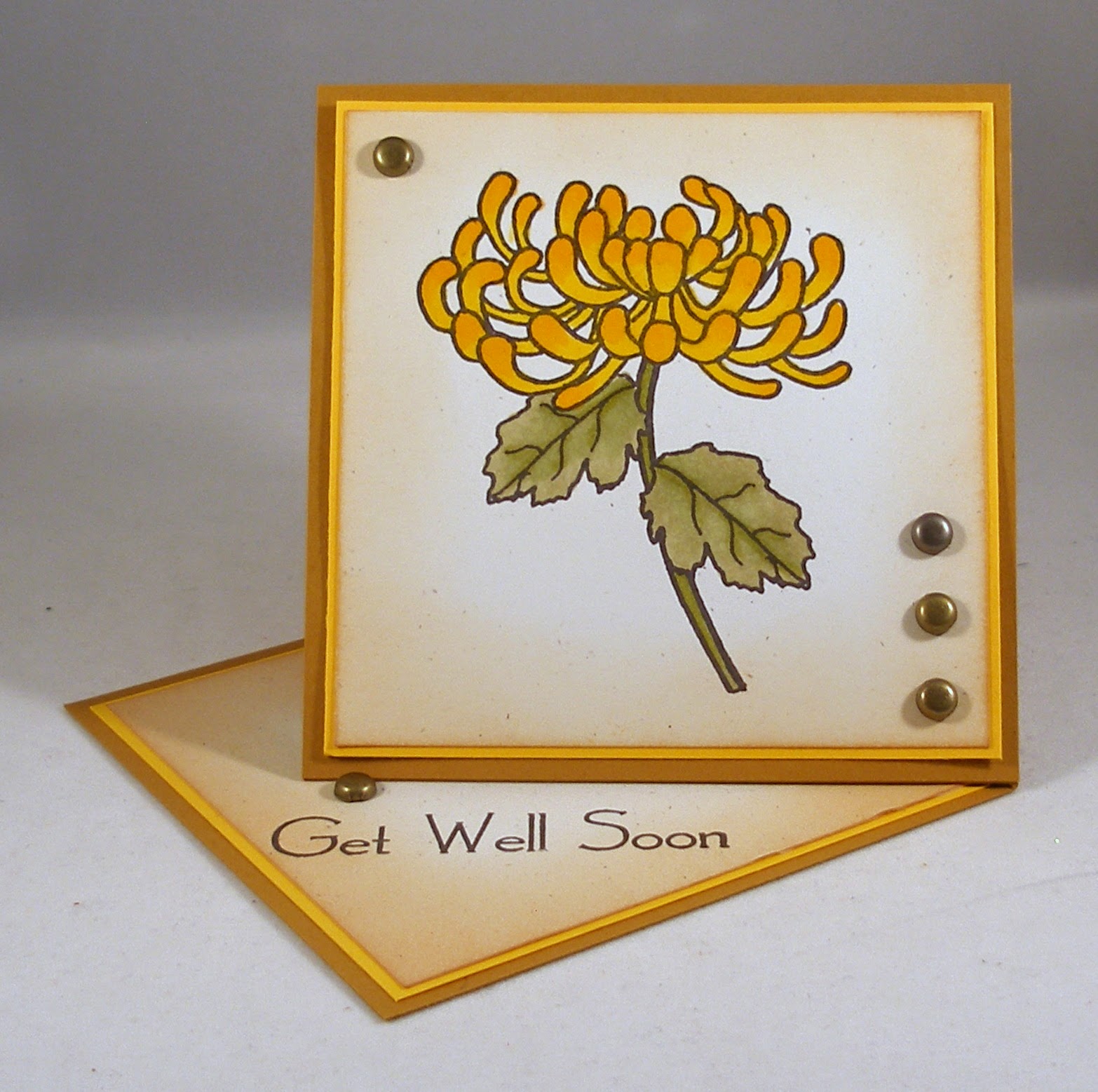 This is the last CCEE Stampers challenge for 2014, and we were asked to make a card starring Santa.  I'm not sure my card is "starring" Santa, but there is a Santa on it.  My neighbor had asked me to make her a card to give to her brother.  She wanted a particular type of card -- a pop-up box card, and it needed to contain several specific elements:  a poinsettia, the Three Wise Men, and Santa kneeling at the manger.  After much thought, I remembered my SU set called Holy Triptych, which I thought had the right type of images for the "pop up" elements.  I did not have a stamp of a kneeling Santa, so I Googled it and found many images.  I printed off one, cut it out, and glued it to one of the folding down panels.  There actually is a poinsettia on the card, but it's hidden behind the kneeling Santa panel. 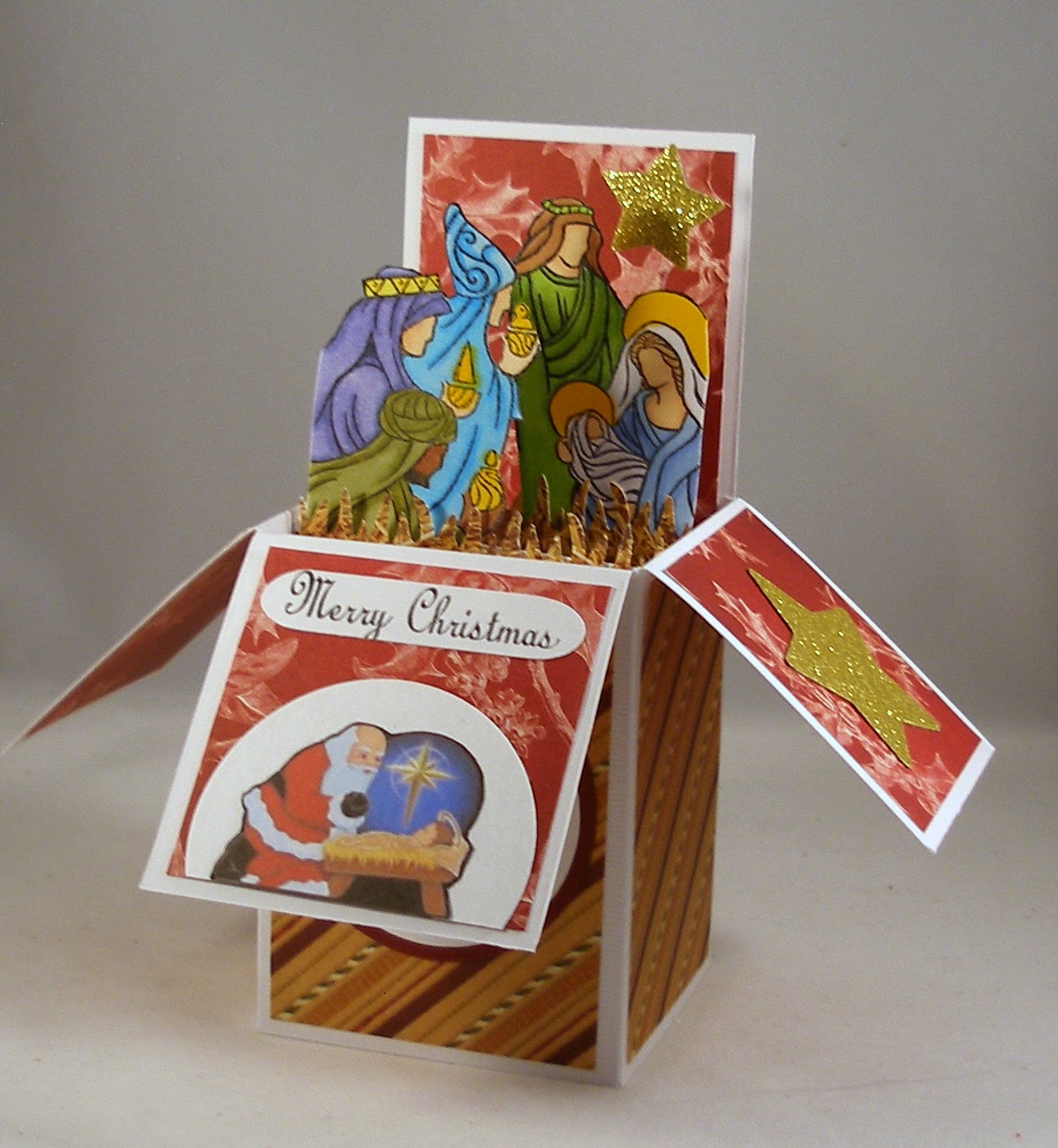 Please go over to the CCEE Stampers blog and see all of the Santa cards created by the rest of the team.
Posted by Lois at 12:01:00 AM 9 comments:

Lynn gave us a quite a choice for this week's CCEE Stampers challenge.  We're playing Christmas Tic-Tac-Toe.  As I am somewhat computer challenged, I was not able to reproduce Lynn's entire Tic-Tac-Toe image.  I will, however, tell you what I have included on my card -- it was down the center column of her game: 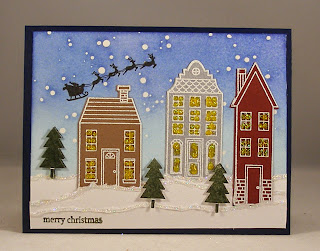 I don't know if I was cheating or not, but I used Stickles (glitter glue) in place of the glitter portion of the column.   I embossed the house images before cutting them out with the dies and made the snow by using masking fluid before I sponged in the sky.

Be sure to check out the CCEE Stampers blog to see what the rest of the team did with Lynn's Tic-Tac-Toe game.