I was so happy last month when Frances asked me to be a guest designer for this week's Crazy4Challenges.  The challenge is close to my heart -- and she knew that!

According to the Days of the Year Calendar, the 20th of March was Hufflepuff Pride Day; the 21st was Slytherin Pride Day; the 22nd was Gryffindor Pride Day, and the 23rd is Ravenclaw Pride Day.  These are the four Houses of Hogwarts School of Witchraft and Wizardry from Harry Potter.  This is a challenge for all Harry Potter fans out there.  Create a card inspired by Harry Potter.  This could include using stamps of the characters, using colors on your card from any one of the four houses, or anything else that inspires you.

I pulled out a favorite set of Kindred Stamps (Students of Magic),  the Karen Burniston Spinner Square die, and some Witt & Sass digital sentiments to create my card.  I'm a Hufflepuff, but I chose Gryffindor for the theme of my card.  Those twins were always up to some mischief! 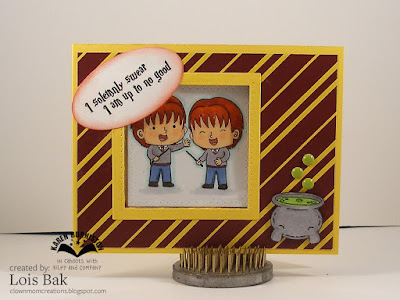 Note the red envelope being delivered by the owl on the inside of the card.  Nobody, but nobody wanted to receive one of those!!! 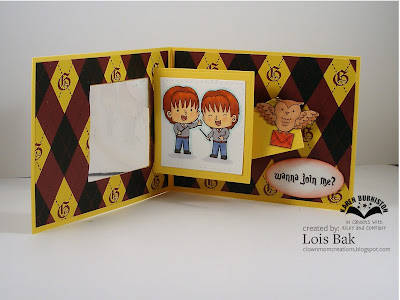 Thanks, Frances, for including me in your fun this week!

glad to have you playing along with us this week, such a fun card.

Two of my favorite characters. Love your card!