As I was looking through today's Featured Stamper's (Pat Smethers) gallery on SCS and saw her ~Gentle Place~, at first I thought it was a one-layer card. But when I pulled it up to look closer, I saw that it wasn't. It was so pretty that I decided that I would CASE it -- as a one-layer card. 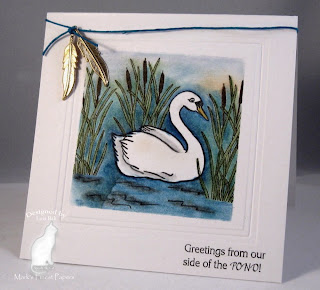 I recently met up with Faith Hofrichter (Markie's Mom) and Jeanne Forsyth (jaforsyth) in Mims, Florida. Jeanne's daughter was involved in an experiment going up in the Shuttle. Jeanne shared with Faith and me some tips on coloring -- both watercoloring and colored pencils. I think I was able to retain the pencil technique more than the watercoloring.


I stamped the swan image with Palette Noir Black and the cattails with Palette Burnt Umber. I used some of Jeanne's tips to give you a sneak peek of a new Mark's Finest Papers set called Our side of the Pond, which will be released later this week. The coloring was done mostly with Prismacolor pencils and Gamsol. The embossing around the edge was done with a square Nestabilities die.
Posted by Lois at 11:44:00 AM

This is my third attempt to leave a message here. I hope it works this time. Great job on the coloring, Lois. I look forward to seeing all the new sets from MFP. Thanks for the peek!