Today's SCS Inspiration Challenge was to create a card inspired by a poster from this site http://www.posters.com/ 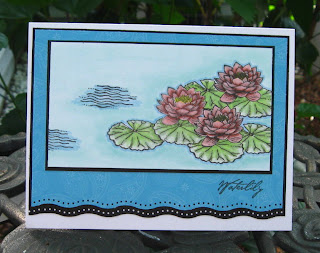 After looking through many of the categories, I settled on a Monet painting of waterlilies -- http://www.posters.com/pv-424702_Water-Lilies.html -- so that I could used my as-yet-uninked Waterlily set from Flourishes. After much masking and stamping, I colored the waterlilies and lily pads with Copic and Prismacolor markers. To give the water a lighter feel, I used some Pebbles Pearlescent chalks in two shades of turquoise. I thought the EK Success border punch gave the feel of water.

There was so much to look at on the website of today's Inspiration Challenge that I had to make a second card. 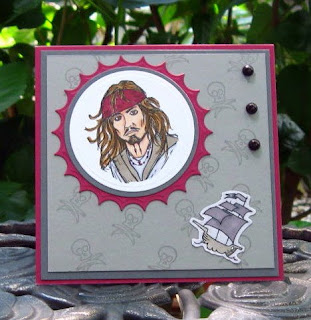 Big Johnny Depp fan that I am, I chose this poster -- http://www.posters.com/pv-552761_Pir...n--Johnny.html I had bought this Rubber Stamp Avenue pirate stamp (which is NOT supposed to be Capt. Jack Sparrow, but you'll never convince me of it) at a stamp show last year and have had a lot of fun with it. I colored it with Prismacolor and Copic markers and mounted it on several mats. The other two stamps are from a Changito Pirate set. Because Capt. Jack's ship is the Black Pearl, I colored the three MS pearls with Black Prismacolor marker.

you were a busy stamper today...both so different and yet fabulous....especially love the 'still life)

Oh Lois ~ I cannot believe you have a stamp that actually LOOKS like Captain Black Sparrow...What a great thing to have in your stash! Johnny Depp and I, well, I wish I could say I know him...I wish I could say more about him....but I will close for now before I get in trouble! love both cards!!