Father’s Day is this Sunday. The only fathers currently in my life are my two sons, so these two cards are for them. 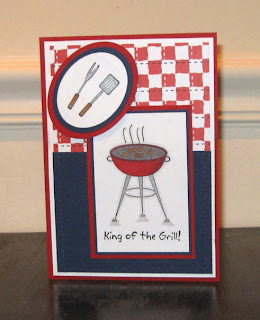 My older son Doug just became a father at age 44. When he got married last year, he became an instant step-father to my daughter-in-law’s two children. Since then they have had a son, William, born in September. Doug likes to barbeque, so I thought this card would be appropriate. I used Gina K Designs’ new set King of the Grill, coloring the image with a combination of Prismacolor and Copic markers. 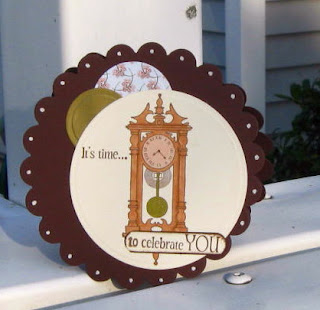 My younger son Scott has three children. This card was actually made for this week’s sketch challenge on Stamp TV. I used another new Gina K Designs set, Special Fathers, for this one. The smaller clock in the set was just the right size for the round card. This image was also colored with markers.

Beautiful cards! I got your cards. Thanks! Your cards are amazing! I want to have your talent when I grow up. LOL!

These are such wonderful Father's day card, Lois!! Love them both, but the one with the clock is so very clever!!