Embossing Only with Nestabilities

Today I was playing with the Embossing Only with Nestabilities technique from the latest video on Stamp TV. 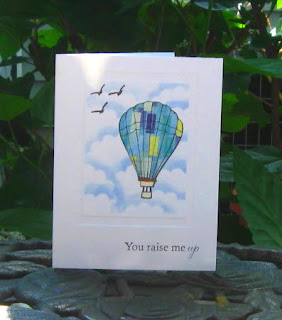 The first card is for the Featured Stamper's Challenge on SCS. Christy S. has a wonderful gallery, and I chose her Wind to CASE. After stamping the image, I masked a rectangle and made the clouds. Then I used the Nestabilities die to make the embossed frame. I stamped the hot air balloon again on a piece of Basic Grey Lime Rickey DP and glued in onto the original image. 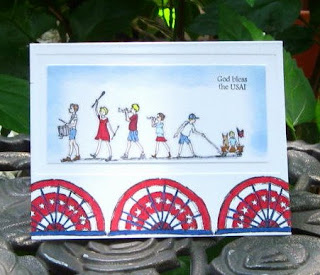 The kids' parade from the Flourishes' Patriotism on Parade is stamped within an embossed Long Rectangle Nestabilities frame. The bunting is also from that same set. I was able to use alcohol markers on the single-layer card because the Gina K Design Pure Luxury White 120 lb. cs is thick enough so that the ink doesn't bleed through to the other side. While the die was still on the card, I sponged the Bashful Blue around the top and sides. I am sending this card, along with a few others, to Flourishes for their Cards for Heros project.