As a big Harry Potter fan, one of the first things to pop into my head when I saw the new Karen Burniston House Pivot Panel die was Hogwarts with its four wizard houses.  I thought it would be fun to cut out the houses in the colors of Gryffindor, Ravenclaw, Hufflepuff, and Slytherin.  I didn't have these dies in time for the Karen Burniston Designer Challenge last week, the theme of which was "HOUSE.," so this is actually my second card for the challenge.

I used the new House Pivot Panels die along with the Tag Book Pop-Up die to create my card.  The front of the tag book has character stamps from Students of Magic and Masters of Magic from Kindred Stamps, colored with Copic markers  The sentiment was printed on my computer and cut out with a Die-Namics word bubble die.  I cut a strip of woodgrain patterned paper with the tag die. 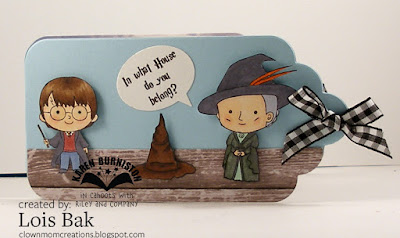 For the inside, I wanted to have a bit of scenery, so I adhered some lightweight sky and grass paper onto a white piece of cardstock and cut out the pop-up panel from the House Pivot Panels die.  In her video, Karen Burniston suggested putting additional background panels cut from the Twist Panel Pop-Up die on either side of the background panels; but, because I was putting trees from the Evergreen Pivot Panels rather than houses on the outside two house panels, I chose not to do that.  I wanted as much of the background scenery to show as possible.

I cut the house die pieces from cardstock from the Harry Potter Cardstock Collection from Character World and added some House pennant stickers from Kindred Stamps.

Here's a close-up of the houses so that you can see them more clearly and also see the pennants. 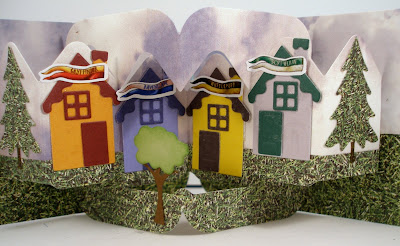 By the way, I'm a Hufflepuff! 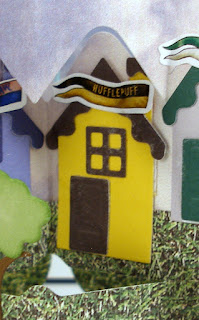