Faith (Markie's Mom) was our hostess this week, and her challenge was to use two different die-cuts on our card. Her challenge gave me the opportunity to use two brand-new (to me) Spellbinders dies that just arrived in the mail. 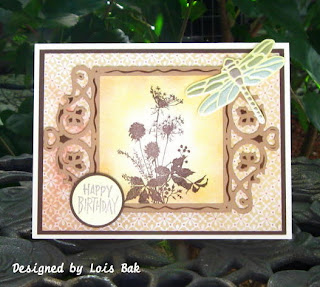 The dragonfly is cut from some pearlescent yellow paper and sponged with Bashful Blue and Old Olive before I removed the die. The frame was cut from Creamy Caramel and sponged with Close to Cocoa. Then I had to decide what to put INTO the frame. I stippled some Summer Sun and Really Rust around the outside of a piece of Very Vanilla cardstock and then stamped the Queen Anne’s Lace in Chocolate Chip. I stamped the Happy Birthday on a scrap of the pearlescent yellow paper with Chocolate Chip, punched out the circle, and matted it with Chocolate Chip. Everything is popped up on dimensionals, with the exception of the background – Chocolate Chip and Basic Grey Porcelain DP.


I decided to do a second card for this challenge, using one of the new stamps I received from Creative Design Boutique. In addition, I wanted to try out a new tool I recently purchased at the CHA Super Show -- The Ultimate Crafters Companion -- which has all types of score lines and templates. 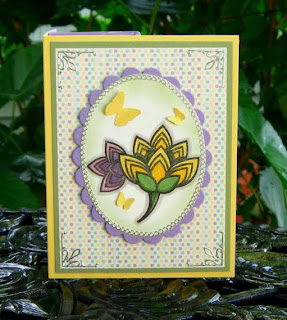 I stamped and masked two of the stamps from Funky Florals by Rita Marie and Company onto white cardstock and colored with Prismacolor and Copic markers. For a little shimmer, I went over all the coloring with a clear Sakura Stardust gel pen. After sponging around the oval die-cut, I sponged Mellow Moss around the edge and added a peel-and-stick silver strip. I mounted the oval on a scalloped oval in Lavendar Lace. The card base is So Saffron, matted in Mellow Moss; and the background paper is Micro Dots DP from Rita Marie and Company. I added a few silver corner embellishments and the three punched butterflies.

The inside, however, is where I used the cool Crafter' Companion. 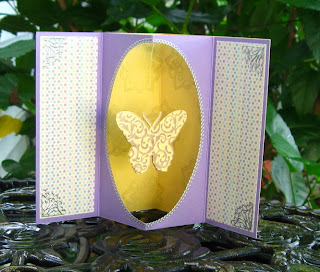 I stamped another one of the flowers from Funky Florals on the inside of the card. Then I cut another piece of Lavendar Lace and scored it for a gatefold card on the scorelines, which are labeled for a gatefold card. I cut out the center oval on the template section. The butterfly, cut from a two-part Cuttlebug die-cut/embossing folder set, is strung on fishing line and taped to the inside of the oval cut-out piece. I glued down two pieces of the same DP on outside sections, added some more silver corners, and glued it down on the card base. Voila, with just a little bit of extra work, you get a clever result!
Images and paper on this card may be found at Creative Design Boutique.
-----
Stamps - Funky Florals by Rita Marie and Company
Paper - So Saffron, Mellow Moss, GP White, Micro Dots by Rita Marie and Company
Ink - Palette Noir Black, Mellow Moss, Lavendar Lace
Accessories -- Oval and Scallop Oval Nestabilities, Cuttlebug Two-part Butterfly, Prismacolor and Copic markers, Peel-and-stick silver embellishments, Ultimate Crafters Companion, Fishing line, Martha Stewart punch
Posted by Lois at 12:05:00 AM

Wow! Both cards are beautiful. The second one the inside is amazing.

Wow! Lois, you took my breath away with your first card today. Everything about this card is perfect.
Your second card is just as terrific. I love the inside with the floating butterfly. I've never done one of these cards, now maybe you've inspired me to.

What lovely cards!! You really did such a great job on them!!

Beautiful! Both cards are lovely. The floating butterfly is awesome! TFS