Scor-Pal "More Than One Score"

This month's Scor-Pal "More Than One Score" challenge is Halloween/Harvest.  Like lots of other card makers, I've become obsessed with slimline cards.  I was curious as to how a slimline easel card would look and thought I would give it a try for the challenge, as there are two scores required.  I recently purchased some slimline stencils from STAMPlorations -- one of which would lend itself to a Halloween card.
The card closed is 4" x 9". I cut two panels -- one is 4" x 9" (scored at 4 1/2") and the other is 4" x 9 1/4", scored at 9" and gluing them together (overlapping the 1/4") making a panel 4" x 18". This makes the easel part. Then I glued another 4" x 9" panel to the "front" of the easel.
Before sponging on the inks, I punched a circle into a piece of scrap paper and placed it on my gray cardstock.  Then I laid the stencil over the cardstock and inked up the circle area with Versamark.  After removing the stencil and scrap paper, I sprinkled on some detail white embossing powder and embossed the "moon."  Then I laid the stencil back onto the cardstock and sponged on Ranger Distress Wilted Violet ink, applying Black Soot over it to tone down the purple color.  I then added the ghosts (trimming them to make it appear that they are coming out from behind the trees) and the bats.  The witch silhouette and sentiment on the bottom panel come from an old Inkadinkadoo Halloween set.  I applied the bottom panel to the card with foam tape, so that the upper panel would rest against it and stand up. 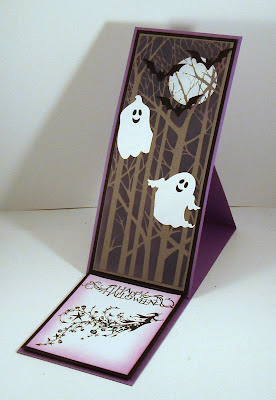 Love what you did here. That is a great witch stamp!

Love the card. Thank you so much for sharing

I love this! I love the composition, I love the die-cuts and I adore the colour scheme you used.
Lots of love from Isia xx