It's always fun to be able to share a Kindred Stamps card with you.  I'm such a geek, and their stamps are right up my alley.  Today is no exception.  Today I have an easel card made with The Next Space Explorers set.  Easel card are so easy to make and yet make a great impression. 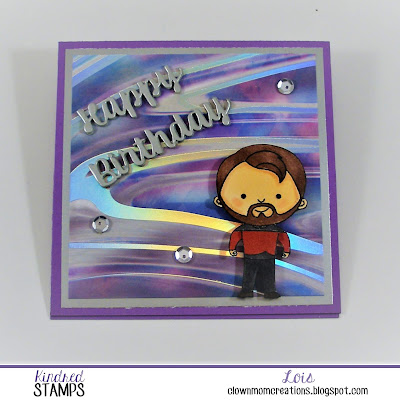 I had found a great pad of patterned paper called Stargazer in Hobby Lobby several months ago -- with lots of designs that lend themselves to several of the "outer space" sets that Kindred Stamps has released.   After creating the easel, I stamped, colored and cut out the character for the front and popped him up on foam dots.  The "Happy Birthday" sentiment die is from Karen Burniston.  I cut it out five times (four from gray cardstock and one from silver paper) and layered them together so that the sentiment would stand out from the background.  Then added a few sequins for good measure.

I used one of the coordinating stickers for the "bumper" on the inside to make the easel stand up. 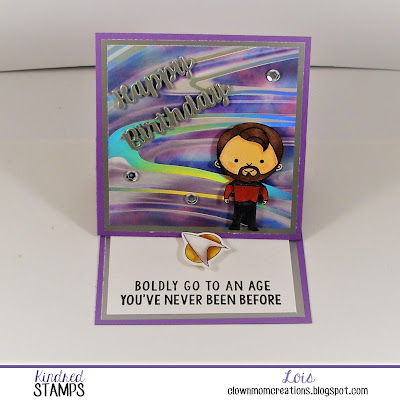 Actually, what I did was put the sticker onto a scrap of heavyweight white cardstock and cut it out so that the bumper would be very sturdy.  There's a large foam adhesive pop-dot on the underside of the sticker.  As you can see, the easel stands up very nicely.

HINT:  To conserve on the more expensive silver paper, I cut the sentiment from one of the matting panels.  It was going to be covered up anyway!
Posted by Lois at 3:00:00 AM