Nicole (ButterflyEars) was the challenge hostess this week on the Stampin'B's Design Team blog, and she had a fun challenge for us this week -- to make a 3 x 3 gift box and four matching cards. I had to check out the tutorial in the Resources section of Splitcoaststampers for the directions for a 3 x 3 box. Actually, I think my box came out around 3 1/4 x 3 1/4, but it was close enough. 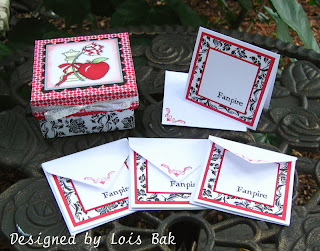 The base of the box itself is SU Basic Black, covered with some G*C*D Floral Garden DP I had left over from a previous Twilight project. The base of the lid is SU Real Red, covered with Real Red DSP. As a true Twilight fan, I had purchased the two Artful Inkables stamp sets inspired by the Twilight phenomenon – Into the Moonlight and Fictionally Inspired. The image on the box depicts the covers of all four books in the series. Those images appear singly on each one of the covers. I stamped it with Palette Noir Black and colored with Prismacolor and Copic markers, sponging around the edge with Real Red. I cut out the squares with Nestabilities and tied the silver ribbon around the lid.

The four matching cards were quite simple – Flourishes Classic White, SU Real Red, and some more of the G*C*D Floral Garden DP. I had to make the envelopes using my Ultimate Crafters Companion Enveloper – what a great tool! I stamped the back of the envelope flaps with a small flourish from Swirly Q’s by Fiskars. I have already given this gift away to my daughter-in-law, another big Twilight fan.
------
* Stamps - Into the Moonlight and Fictionally Inspired, both by Artful Inkables; Swirly Q's by Fiskars
* Paper - SU Basic Black, Real Red, Real Red DSP; G*C*D Floral Garden DP
* Ink - Palette Noir Black, SU Real Red
* Accessories - Prismacolor and Copic markers, Nestabilities, Silver ribbon, Sponge dauber
Posted by Lois at 12:05:00 AM

Wow Lois what a beautiful set this is, it's looks terrific. Lots of work in this one.
I was going to play along this week as I've missed the last couple, but not sure if time will permit. Off to have a look at the all the others now.

Hi Lois, you are doing such fabulous work I have given you a BLOG award
Hugs Michelle

GF, you cannot go wrong cheering for the Vampyres. I loved this series of books so your box and cards is terrific in my opinion.
I love the box with the Twilight images, you cards are beautiful and I love how you stamped the bat image on your envies.
AWESOME!!!!
Hugs, Nicole

I may not know anything about Twilight, but I know a wonderful creation when I see it.....lovely, Lois

First time visitor to your blog--love it! It's amazing what we can learn in our "old age"! (from a grandmother of 4.)

What an awesome set. I just love coming to your blog. Gloria M.