This month's Scor-Pal "More Than One Score" challenge is Anything Goes, but with the option of making a patriotic card.  Because it's almost the 4th of July, I DID opt for the patriotic card.  I had seen a really cool card (actually several cards) on Pinterest the other day and wanted to give that technique a try.  I'm not sure what it's called -- on one of them the crafter called it a W Fold.  The front is pretty simple.  As I was making this for the 4th of July, I couldn't resist putting some fireworks on it.  The ribbon is adhered to the card base prior to adding the panels.   I had bought this pack of red/white/blue patterned paper at Tuesday Morning some time ago. 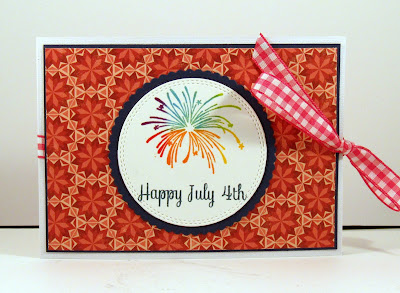 On the inside is where the W Fold comes in.  Most of the cards I saw on Pinterest had either butterflies or flowers on those inside panels.  I opted for more Fireworks! 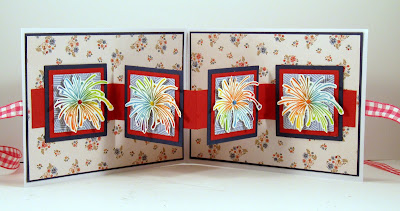 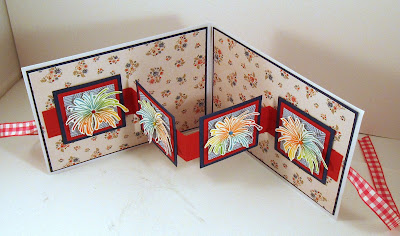 I had stamped the fireworks with a rainbow pad from ColorBox.  I clear embossed them and fussy cut the ones for the inside.

I hope you enjoyed my card.  If you'd like to play along with us, make a "more-than-one-score" card (patriotic or not) and post it on the Scor-Pal blog.  You might win a $25 gift certificate to the Scor-Pal website.
Posted by Lois at 12:00:00 AM

Such a cool project and I love the colors you used.

Love your card, Lois! Such a fun fold! Thanks for sharing and inspiring us all!

Wow - what a fabulous card! Thank you so much for sharing your talent with us!
Lots of love from Isia xx