Star Wars is one of my favorite movie franchises -- even the ones with Jar Jar Binks!  I was really excited when the new trilogy began -- with some old favorite characters as well as a number of new ones.  I've made an accordion card using the Karen Burniston Fancy Label Accordion die, some Galactic Adventures stamps from Kindred Stamps and a favorite background technique -- the Galaxy Background.  In case you've never done this particular technique, I have described the technique on this post from 2017.  It's not really difficult, just messy. 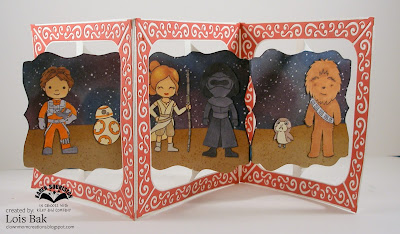 For this particular card I created the background prior to gluing the three panels together.  For the ground I cut three more panels from tan cardstock, trimmed them down, and sponged along the top with some Vintage Photo distress ink.

When closed, this is the front -- created by cutting an additional white panel with the die and just cutting out the inside panel and adhering it over the first panel on the card, covering up the tabs that connect to the second panel.  Then I made an additional galaxy background panel and cut it out with the smaller die and stamped on the sentiment with Versamark, embossed with detail white embossing powder. 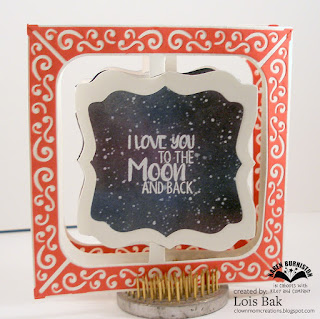 The frames on this card were cut using the Karen Burniston Fancy Flourish Frames, which coordinate with the accordion die.  And I hope you'll give that galaxy background a try.  It's really fun!
Posted by Lois at 12:01:00 AM