I'm really excited about being a guest designer for Kindred Stamps again this month.    The set that I have to show off is from my favorite series of stamp sets that they've created -- this one is called Catcher of Beasts. 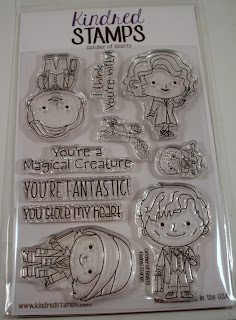 My first (and favorite) project was quite involved.  If you're familiar with the inspiration for this set, you know that the Beast Catcher carries a suitcase with him at all times.  And that's where I started.  I went online and Googled "suitcase template" and found several.  I picked one and printed it out, copying it onto brown cardstock.  I used some hardware from a Stampin' Up embellishment box for the buckles. 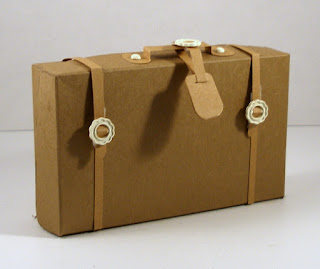 I'm not a big fan of ATCs (artist trading cards), but they seemed to be what this project required.  I made one for each of the characters in the set, including the "beasts."  They fit very nicely inside the suitcase -- with room hopefully for more (hint, hint)! 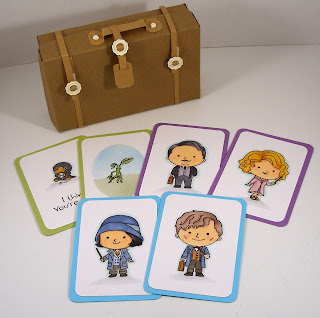 Here's a close-up of the cards. 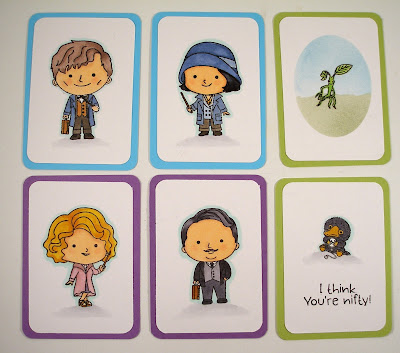 My next card is an Eclipse card, made with a set of Gina Marie alphabet dies I recently purchased at a stamp expo.   It features the Beast Catcher and the lady wizard from the Ministry, set against the "New York" skyline.  If you look closely, you can see the word MAGIC in raised letters. 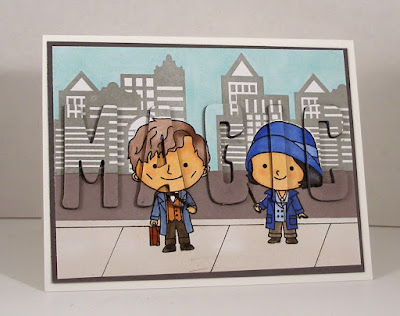 I thought the baker should get his own card, so I pulled out some stamps I bought maybe 10 or 12 years ago for this one.  This just proves my argument that you shouldn't purge your craft supplies too much!  I think the baker has a crush on that cute lady wizard out on the sidewalk. 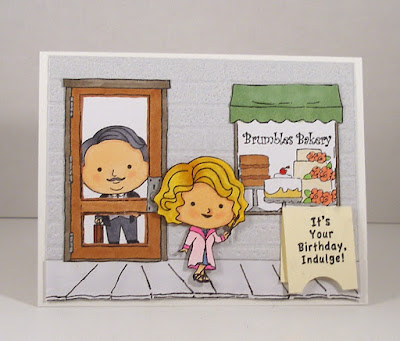 Do you remember which house the Beast Catcher was sorted into when he was a student at Magic School?  I'll give you a hint -- the house colors are yellow and black and the mascot is a badger.  Oh, and by the way, I was also sorted into that house!

I've recently seen some cards that were cut and folded like my next card.  They were created with a die, but I decided to see if I could make one without a die.  Turns out I could!  I used one of the stickers from the Wizard Houses Sticker Sheet on the center panel. 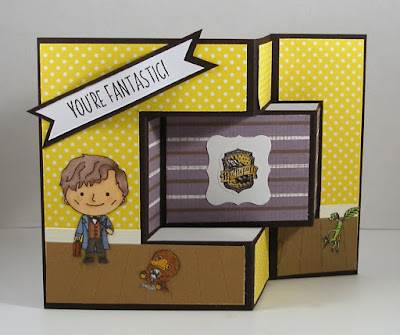 My final card today was made with another die set I bought at that same stamp expo -- a sliding barn door.  The vendor, Creek Bank Designs, also sold little snap-together "slider guides," which made the door move quite easily (and worked so much better than the "pennies and foam dot" method I had been using for slider cards).  I hand-lettered the sign on the door.  To get the board look on the door, I inked up a woodgrain embossing folder with brown ink prior to running it through my Big Shot. 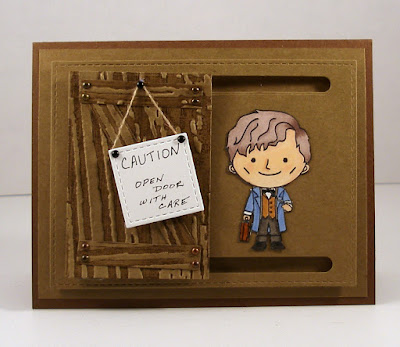 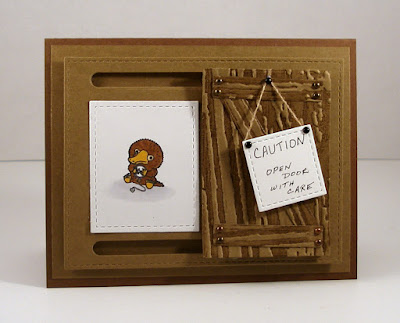 The Kindred Stamps team, myself included, hope that you've enjoyed reading about my card makes for this release. If you would like an opportunity to win shop credit, please go and comment on everyone's blog post!  One random winner will win a $10 shop credit;  they will be contacted privately and announced in our Fan Club, Kindred Stamps Fan Club!

I live everything about all of your designs. The cards are such a wonderful idea and beautifully created and colored. The interactivness of your designs are so amazing. Thank you for the beautiful inspiration!

Lois, love all of these. The suitcase is so cool!

Oh my these cards are amazing! I love the suitcase idea and the bakery and ... everything!

Oh wow. My fave set. I love the ATC's and I love your suitcase. Great work!!

I may be a little biased, but I loved your cards the most. It’s a family thing. 😂 BTW, that’s the same house I was sorted into as well!!

This is all so fabulous! Nice work

These are amazing cards and amazing ideas!

wow! So many great ideas! I really like the cards in the trunk... so cute!

These are awesome! Very creative! Love the stamp set

What a variety! Love them all!

Wow! You do amazing work!

Your cards are awesome xx