I attended StampFest this past weekend and had a great time.  One of the booths in which I plunked down quite a bit of cash was the Impression Obsession booth.  I had five die/die sets on my list, three of which I purchased.  However, I also bought about six or seven dies NOT on my list.  Two of them are on this card: 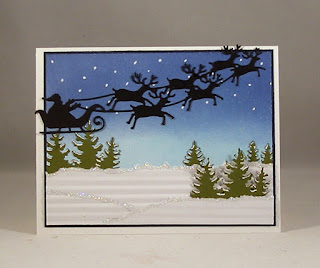 One of the cards on their sample board was actually a tag using this Santa and Sleigh die -- and that sold me.  I learned a little trick for making snow drifts using a crimper from that tag.  I embellished a bit from the tag by making a second drift and tucking in the stand of evergreen trees behind it.  Some white gel added some snow to the branches of the trees.  I used that same white gel pen for the stars.

I'm entering this card in the Impression Obsession Christmas in July challenge.

So pretty, Lois! Love it! IO has beautiful things :-)

Beautiful card! I would have liked to visit the Impression Obsession booth!

Oh, Lois, what fun to have attended StampFest! And I would have done some major damage too - hehe!! I love this Christmas card, and what a great Santa and sleigh die! I love your "crimped" snow idea...looks great, and I love the evergreens! Beautiful card, and it's a reminder I need to get going myself on these! Hugs!

what a gorgeous card! Thanks for joining us on the IO Challenge!

Get professional trading signals sent to your mobile phone daily.

Start following our signals NOW and make up to 270% a day.