Today's Featured Stamper on SCS is Tracy (a/k/a whoistracy), someone with whom I was unfamiliar. I actually had time to CASE two of her cards.

For my first CASE, I chose this card, using the same layout and similar colors. I did, however make several changes: 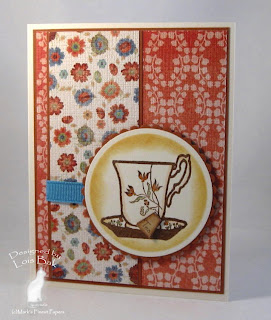 The papers I used are from a DCWV stack called The Crafty Stack that I found recently at Joann. The teacup image is from Mark's Finest Papers' brand-new set called Floral Tea. Tracy had popped up the pine sprigs and Christmas balls in her teacup -- I just popped up the tag from the teabag.

As I was looking through Tracy's gallery, I passed no less than seven cards with a quilt pattern on them before coming to this one. I got the impression that she really likes quilts. My best friend's birthday is next month, and she is an avid quilter. So I'll give this one to her as a birthday card. I'll put the birthday sentiment inside. 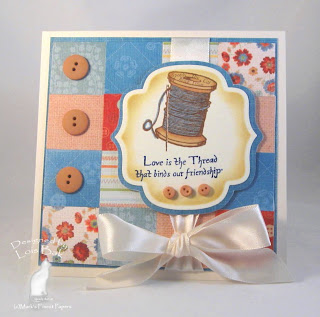 I kept the layout of Tracy's card, but made some changes:
* No stitching
* Substituted buttons for her rhinestones
* Square card rather than rectangle
As I had that DCWV Crafty Stack still on my desk, I used scraps from it to make my "quilt." The images are also from a new Mark's Finest Papers' set -- this one called Sew What? I think this was my favorite this month.
Posted by Lois at 3:57:00 PM

Beautiful cars, Lois! I really love the DP on the first one! The warm colors with the tea are just comfy cozy together! :)

Your cards are sooooo pretty, Lois! I dropped by to check out what salt and pepper shakers I've missed. It has been fun seeing all of them. Glad you shared your interesting collection with us.