This past weekend I attended a Technique Retreat sponsored by Mark's Finest Papers at the Stephen Foster Folk Culture Center in north Florida. Faith Hofrichter (Markie's Mom on SCS) showed us several techniques, and we made a total of 20 cards, using current and not-yet-released Mark's Finest Papers stamps. It was a small class (nine participants), so we were able to get a lot of one-on-one instruction. I've included six of the cards in today's blog. I'll show you some more later in the week. 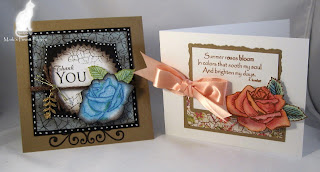 These two cards were made using Spring Roses. The card on the left also included a crackle stamp from a not-yet released set called Background Fun. The roses were colored using Faber-Castell pencils and odorless mineral spirits. 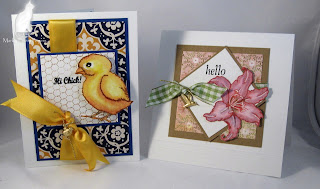 The main set used on these two cards is Spring and Easter, again using the Faber-Castell pencils and odorless mineral spirits. The background and sentiment on the chick card are from Chicken Scratch, and the sentiment on the lily card is from Pears and Hollyhocks, to be released in June. Notice the little charms -- I love 'em! 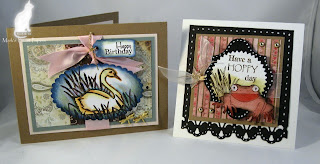 Our Side of the Pond is a mix of a couple of funky frogs and a beautiful swan. You can get cards both fun and fancy using this set. The swan card was done with colored pencils; the frog card was done using sponge daubers and Tim Holtz distress inks.
--------------
If you ever get the chance to participate in one of Faith's retreats (she has two each year -- the next one is in October), you will have a great time. All we did for almost two days was stamp -- taking a little time out to eat (Faith's husband, Mark, does the cooking) and sleep.
Posted by Lois at 6:34:00 AM

What amazing work, Lois!! I dream of some day attending this fabulous event!!!

Maybe if we save our pennies, Liz and I can plan a Florida road trip!!

Beautiful Lois! These are wonderful, sounds like you had a great time!

Sounds like a grand time. These are all gorgeous cards.

so glad you had a fab time...your projects are BEAUTIFUL