Just a short post today to show you a few more of the cards we made at Faith's Stamping Retreat. 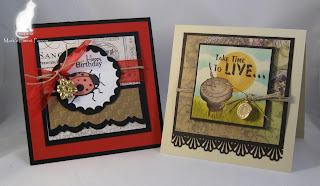 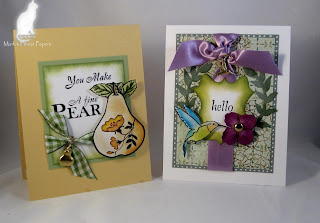 These two cards were made using a set that has not been released yet -- Pears and Hollyhock. Be sure to check out the MFP Blog Hop in June to see this set in full. The medallian and laurel leaves are a Tim Holtz Sizzix die. The cupcake card is colored using pearlescent watercolors -- what a cool look they create. Cupcake Birthday will be released in June also. The images on the card on the right are from Tropical Vacation. I tried a new way (for me) to make the sky on this card. I like the way it turned out.
----------
Glad to share some of our creations from the retreat with you. We had a great time!

Lois, these cards with the new sets are FABulous!!! Great job. TFS! (Wish I had been there too!)