This week's Twilight Tuesday inspiration challenge is a sketch. I must confess that my card has very little to do with Twilight today. I've been making Christmas cards, so that's where I went with the sketch. 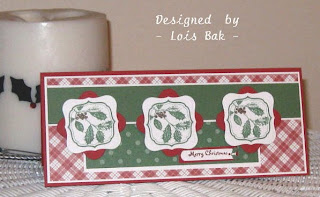 I bought this pretty little dollar stamp with the sole purpose of being able to use it with my Spellbinders Labels One die. I thought this sketch would lend itself to the image. After stamping three times with Memento Cottage Ivy, I colored the holly berries with a Spica glitter pen. I had to wing it a little bit with the sentiment. Originally I had cut out an opening with the Word Window punch and stamped the sentiment in the white opening. However, I realized too late that the punch opening was crooked. So I had to layer another piece on top of the opening. I added two little punched-out holly leaves at one end.
---------
Stamps - Studio G, Lizzie Anne Designs Many Merries
Paper - Real Red, GP White, Garden Green, Garden Green DSP, Paper Pizzazz Christmas Plaid
Ink - Memento Cottage Ivy
Accessories - Labels One die, Word Window punch, Spica glitter pen, Marker, Holly punch
Posted by Lois at 7:45:00 AM

It is a great take on the sketch Twilight or not! :D Great christmas card! I am glad you found inspiration in the sketch, thanks for playing!

what a fab elongated card....