It's time again for the Karen Burniston Designer Challenge, which this month is "Autumn Slimline."  I was so happy when I received the dies in the new Karen Burniston release -- there were several slimline dies in the mix!   The card I have today uses the Long Rectangles - Crosshatch, as well as the Mini Pops Pop-Up dies. 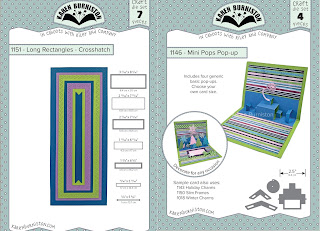 I love warm colors, particularly orange, and they lend themselves so well to autumn/Thanksgiving cards, which is what I have today.  I added a few other KB dies on this card -- the squirrel from Woodland Animals, the leaves from Autumn Elements, and several words from Word Set 7 - Autumn.

I used most of the Mini Pop-Ups on the inside, along with several images from the Autumn Elements set.  I can see where these small pop-up elements are going to be used lots of times in the future. 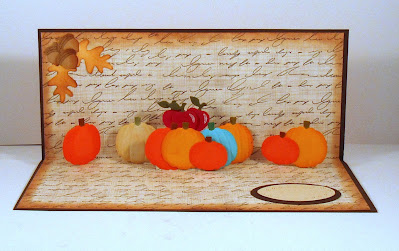 If you're a slimline card lover, stay tuned because I will be having several more cards made with this and the other slimline dies in this release.

What a beautiful card! I love all of the colorful pumpkins!

Love the array of colorful pumpkins - a clever and beautiful card

Beautiful colors of pumpkins.
You have made me hungry for pie!!!.
Marcia Vick

Love the colors you picked. Loving all the pumpkins.

Love this card and all the little pumpkins!

Love the colors and design

Oh my!! Gorgeous card and I love your pop up pumpkin patch. Hugz