As a big fan of the TV series that influenced this brand-new stamp set from Kindred Stamps, I was so happy to be able to create some cards for Release Week!  Science Geeks has my kind of nerdy characters.  I have three cards to share with you today.

My first is an Explosion card.  How appropriate is this type of card for a sentiment that says "I hope your birthday goes off with a bang!"  The front looks pretty normal, but . . . 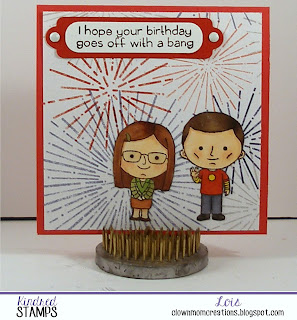 My second card is dedicated to the astrophysicist in the group of friends.  The designer paper I used for this card is associated with another Kindred Stamps product -- the Space Heroes box, but it worked perfectly for this card! 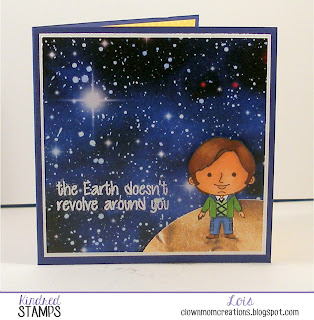 For my third card, I used another brand-new toy in my arsenal -- a door die from Lawn Fawn.  I used the Kindred Stamps Brick Stencil for the wall.   This card was inspired by one of the many idiosyncrasies of this fandom. 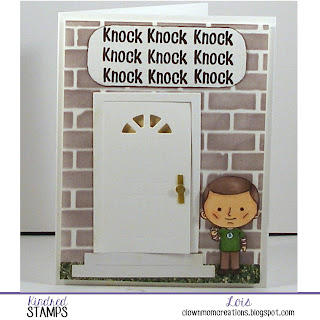 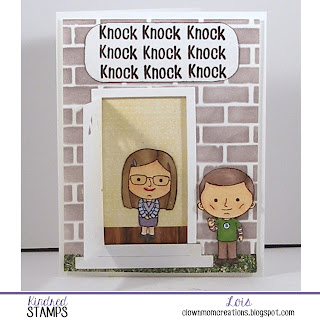 I must admit I had lots of fun with this set, and you will probably see many more creations from me using it in the future.

The entire Kindred Stamps January release will be available Friday, January 25th at 8am PST/11am EST.  Be sure to check out the Kindred Stamps blog on Friday for the full product release as well as the complete line up of all the Kindred Stamps Design Team projects from release week!  If you visit and comment on all of the designers' blogs this week, you could win $15 in Kindred Stamps shop credit!  So join the Fan Club and release event, show the design team some love, and get ready to empty those wallets this Friday!
Posted by Lois at 3:00:00 AM

What a fun collection of cards. Love the knock knock one in particular.

I love these!! That explosion card is such a brilliant idea for this set in particular!

So obvious you are a fan. Absolutely love the Big Bang card!

Ha! I love the idea of the Knocking at the door card, but I love the way the other one opens up!

Hahaha! OMG! I can’t even pick a favorite out of these three. I’m a huge geek of this fandom as well. I haven’t ever attempted an explosion card like that. I may need to try it out now. The paper from space heroes really is perfect on your second card. Thanks for all the inspiration.

As a fellow fan of the show, I adore the sheldon and Amy door card. It is genuis!

I love these! The explosion one is PERFECT for this set! They're all super cute. I can't wait to get my hands on this set!

Perfect! All of them!

Love the exploding card! So cool!

It doesn't look like you had any fun at all making these cards ;) Great work!

OMG! These are AWESOME! I love all your fun backgrounds!

Your cards are so fun.

So great. Different from other cards

Lois, you always amaze me! Gorgeous stuff, as always :)

These are perfect! Super fun cards!

Love the card with the door, knock, knock,,,, so cute!

Such fabulous projects with this set! I cannot pick a favorite, but the knocking one makes me smile the biggest! Love how you used the space paper with out fav astrophysicist, too!

Love these! Now to figure out the sets I want.

These are all so much fun! You had s many great ideas with this set! Love!

What fun cards! Love them 💕