Vicky Gould is starting off her month as hostess for the CCEE Stampers celebrating a holiday I had never heard of before -- "National Pigs Day."  This reminded me of a funny little story from when I was a kid.  My brother Bob (who is 2 1/2 years younger than me) was ill.  My uncle for some reason or other decided that Bob needed a pet to perk him up.  He bought him a pig!  BTW, we lived out in the country, so a pig might not be considered an unusual pet.  BUT, the pig ran away shortly afterwards, and we could never find him.  About a year later, someone said they saw a wild pig out in the woods.  We were certain it was Bob's pig! 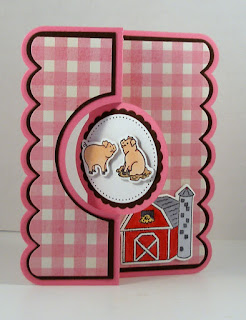 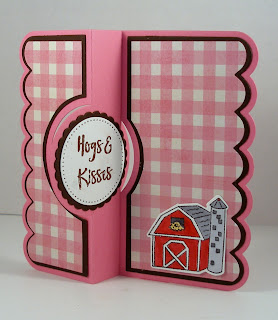 What a super cute piggy flip it card

Hogs and kisses to you too, Lois. Love your card! The pink just pops and gives a giggle to anyone who sees it! TFS!

Such a fun pig swing design. Adorable in pink gingham!

Love the pink and white gingham and the cute mechanics of this card, Lois.

Fun to flip the piggies, and have a view to the farm. Wonderful all in pink!

cute cute cute, love the colors, the flip and the stamps.