This week's featured tutorial on Splitcoaststampers is the Triple-Layer Pop Up card.  I love trying new techniques, particularly 3-dimensional ones.  So I tried one -- and was pretty pleased with the results.  Last year I saw a card Lynn McAuley (allee's on SCS) had made using a now-retired set from Mark's Finest Papers called All Aboard, showing a train on a trestle bridge, and it's been in the back of my mind ever since as something I'd like to try.  A new set called Train Talk, being released next week, also has a train as one of the images (actually there are three trains in the set).

Here is the inside of my version of Lynn's card --

If you look at the tutorial, you will see that there are three layers on this card, separated by small "boxes" to pop them up separately.  I made the trestle using my Cheery Lynn lattice die, cut in half.  You can't see the oval cut-out part behind the trees layer, so I took a photo of this layer to show you. 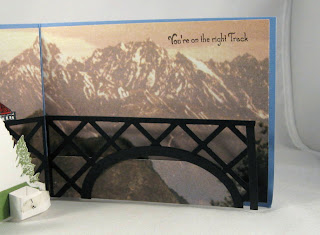 I created the cut-out portion by cutting with a Petite Ovals nestabilities die, and then cutting a frame using two different sizes of the ovals.

When the card is finally constructed, it is a bit bulky; so Kim Score, who wrote the tutorial for SCS, suggested putting a belly band around the card when it's closed.  I made the band using multiple images of the railroad track from the MFP set, On Track.  The locomotive is also included in the new Train Talk set.  Here is the front of my card. 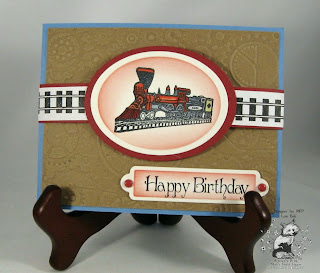 If you have some spare time, you should give this technique a try.  It was very fun!

Holy train smoke, this is AWESOME, Lois! What a terrific idea to use a train theme for this type of card. You did an outstanding job!

This is more than a card; this is a work of art! Truly amazing. I couldn't believe my eyes. A lot of work went into this, but it was worth it. I'll bet you hate to part with it!

Holy cow - what a fantastic card, Lois. I'm so impressed - I have a hard enough time with a regular card! It really is gorgeous - and what a wonderful card for someone!!

Ohmygosh, what an awesome card. A really beautiful scene.