Some time ago, I inherited a sewing cabinet from my grandmother. We always called it her Martha Washington sewing cabinet, although it is just a replica -- probably made sometime in the 1920's. I had seen several cabinets in a restaurant about two years ago and decided I wanted to change the look of my cabinet, which I keep just inside my front door.

This is what the cabinet looked like before I started my project. My friend Bonnie was quite upset when I told her that I was going to paint it. I looked on-line to make sure I wasn't going to ruin a valuable antique. Because it is a replica, similar cabinets were selling for under $200. So I didn't think it was like I was ruining something that could possibly bring me thousands of dollars! 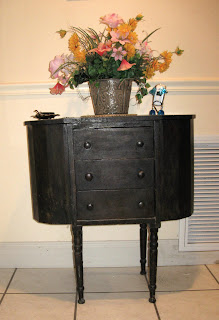 The "invisible" hinges on one of the side compartments were broken at some point, and my grandfather attached small decorative hinges on that side. So I decided I would look for some decorative hinges for the end compartments. Unfortunately for me, the internal hinges presented me with a problem -- I couldn't screw in all six screws on each hinge because they were hitting the metal within the wood. So I screwed in as many as I could and then cut off the tops of the screws with a bolt cutter and glued them into the remaining holes. 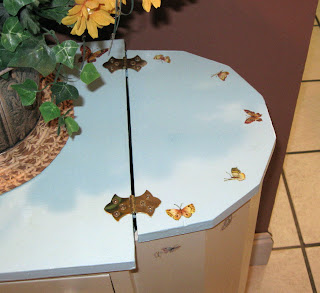 But I'm getting a little ahead of myself -- I did that AFTER I painted the top. 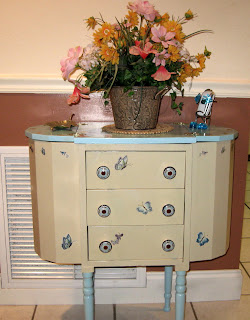 After stripping off the varnish, I painted the base of the cabinet with almond spray paint and the top and legs with aqua -- three coats of each. Then I put on three coats of polyurethane. The cabinets I had seen at the restaurant were stenciled around the top. I had never done stenciling before and didn't want to make this my initial try, so I used rub-on butterfly decals. 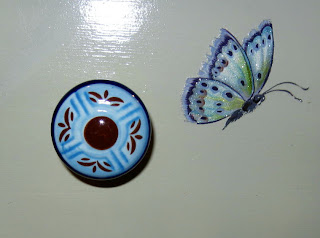 I had looked for two years for the right knobs. I finally found them at Hobby Lobby, of all places. The wall against which the cabinet sits was originally peach -- which was fine when the cabinet was a dark color. But the almond color would have melted right into that peach color. So I brought the color of my kitchen around the corner and painted the area below the chair rail the nutmeg color of the kitchen. I love the way it turned out. 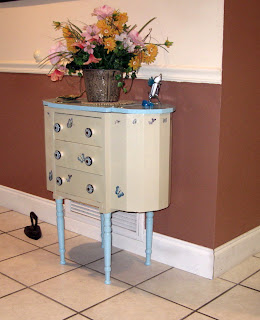 I hope my friend will not be too disappointed when she sees the finished product. I'm trying to decide if I want to put some contrasting stripes on the spindle legs. But that will be for another day!
Posted by Lois at 10:29:00 PM

Lois, this is just too cute! What a wonderful job you have done! Thank you for sharing it with your "dirty" friends! :)
Sharon

Thanks for the link. I think it looks beautiful - it must make the space it was in feel lighter and brighter. You really did find the perfect knobs too - you must be so pleased with how this turned out.

Oh Lois--I LOVE it!!!! You did a fabulous job "refinishing" this replica of a Martha Washington sewing cabinet!!! TFS

Oh Lois! I have been wondering how you made out on your project!! You did a FANTASTIC Job!!! I looks wonderful! You should be so proud of yourself!!
Thanks for showing us!
Lisa (Ashdale)

Great refinish job-I like it. I also have a cabinet that looks like your original except mine has straight legs instead of spindle. Now I am thinking of redoing mine!!

I just saw this today because I discovered the DTGD after-chat thread today, lol! Maybe I'm like your friend who was kind of upset when you said you were going to paint it, but, when I saw the "after" pics, I am definitely bowled over! You did a beautiful job - right down to the little details!